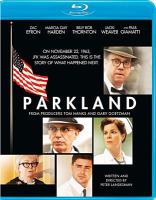 Wow, did this movie bring back some old memories. When it happened I was attending UPS in Tacoma and had been to Cheney Stadium in Sept of 63 to listen to Kennedy speak. Then in November he was killed by Oswald. Today there are still many theorist that feel that feel there was more than Oswald involved in this murder.
Does this movie put those thoughts to bed, not really other than his brother did not think much of Oswald's capabilities and his mom was a bit off balance like her son Harvey. We liked the movie and recommend it to others.

Wow. Lot's of interesting comments below. I liked it.

what a farce. lies, lies, lies. to call this 'fake news' is merely to inflate its value. YOU CAN'T HANDLE THE TRUTH! So injest this shit, instead. why do people come up to me and drop Hanks' name? Because he grew up in El Cerrito? No, it is because he and the likes of Ken Burns are what pass for oracles of truth in this benighted age. I, at least, will resist the tendency to live the lies about what happened November 22, 1963 to this once wonderful country......or to tell lies about what actually occurred: everyone involved with this project should be ashamed of themselves, just as the phony biographies of j.edgar hoover, and the sick retelling of what happened to jfk's brother, bobby, in 1968---all those participants in the perpetuation of the Big Lie, should likewise be ashamed. spend it well, for after you pass from this life, don't expect to go to Heaven. You blew it.// I once wrote a comment on a biography of Beatle Paul at the Bothell branch. The comment remained but it never made it to the RECENTLY REVIEWED section of the catalog. IT people asked my permission to enter my account; this was denied. that's where the issue was left, until today, when I wrote the scathing sentences above about the PARKLAND film, put out by Tom Hanks. I did that at Bothell branch. I currently type at Bellevue, where I discovered the item was pulled from the RECENTLY REVIEWED list, where I had discovered it, at Bothell. Yet, my comments remain, accessible below the item. Isn't that nice. Well, the librarian who wrote this film was a 'true' account of the events of that day in Dallas, might have taken humbrage. I believe you can still read that blurb, directly below the title and image of the film box. Some people might like to think of librarians as truth-tellers. // Don't worry: I am not trying to connect Sir Paul with what happened to President Kennedy. That is not the "coincidence" or similarity I am exploring here. It bothers me that our country is continually being fed lies about what occurred to our lovely president. In truth, there are many such happenings that have occurred in this country in the 20th century alone.// What is it, who is it about the bothell branch that made both items untenable (once sullied by my heathen opinions?) You understand I jest......the last half of that sentence. Paul had Irish blood, JFK more obviously so, could there be a prejudice of that kind? For that matter, so have i.

I think the depiction of what transpired at Parkland Memorial Hospital was shown but only superficially. From what I previously read of that day, I anticipated seeing more hysteria and disbelief from the crowds, which wasn't shown at all; to the astonishment of the doctors & nurses that treated President Kennedy, which lacked a lot. The Secret Service came across as being inept at doing their job to being totally devoted to President Kennedy, even in death.

A bunch of very good actors...with their talents totally wasted on this film. Boring, uninspired... Great potential with the cast, but, fell way short....... Don't bother with this one !!

Interesting audio/video to talk about. I could say that as a piece of film-making it is very well done. And to keep an eye on Peter Landesman’s other work. While all that is true, here in an audio/video reality
‘making’ is not what it once might have been… >>>>> I’ve heard vr is coming back; why was it detained some capitalist where? >>><< Landesman is straight and a grassy knoll denier. How does this effect a cinema verte? (feels very off-putting knowing this propaganda roams the media range—of course, media and everything else is an illusion I don’t want to make too real for myself). >>>>> Very good video work, very exciting, nice guerrilla process, excellent editing. It’s propaganda. Leni what’s her name. So rare to get propaganda done by an artist. BETTER WATCH OUT! JEEZ…. Great subtle work catching nuances etc. IS EVERY SECOND OF FOOTAGE A LIE? Or are the lies juxtaposed and even bigger than the film entire (you know, gestalt and synergy). Or are the lies merely strewn throughout like ads in a podcast? >>>><< Little moron propaganda Republican Christian-fascist-style not. >><<>> I’m afraid of myself having watched this film. >>>> Is it so long after ’63 that it is open season for lying to youth? I saw a “Nova” recently on PBS (funded partly by the Koch Bros) totally debunking arguments saying Oswald couldn’t have fired 3 great shots. Posner had a book a ways back. ><><> Hey, I’d know if I killed myself who did it. At least.

Parkland is a historical drama that will resurrect memories of the awful weekend of 22 November 1963 for those who were alive then. It was just after lunch. I was in fifth grade. We were having an English lesson. Suddenly the principal came to the classroom to announce that President Kennedy had been shot in Texas. (My school had no intercom.) I recall a classmate speculating that the President was supposed to go hunting that weekend with the vice president and that he may have been shot on the hunting trip. Already the conspiracy theories were circulating! A few minutes later the principal returned to say that the president was dead. We had no call for a moment of silence or prayer. School continued pretty much as usual. I remember my mother picking me up at school that day because she was off work. She drove me home. I turned on the TV and as I watched the news began to cry. Two days later (Sunday morning) I was on the back porch steps cracking rocks with a hammer when my mother came to the door and said "Oswald's been shot." I rushed into the house and there it was on live TV, Oswald's death replayed over and over.

It's no surprise then that the historical drama Parkland held me spellbound. It captured the horror, anger, sadness and confusion of the events in Dallas in a way that kept my attention and brought back these and other memories of that weekend. I was particularly impressed by the performance of Billy Bob Thornton as a Secret Service agent and Paul Giamatti as Abraham Zapruder, the man who filmed the assassination.

Good movie. The chaos and disbelief of the events is well shown. Robert Oswald's confusion by his brother's actions and his stoic helpfulness to his mother (who seems crazy to me) and the wife and children left behind is to be admired. Showing the events from the doctors and nurses perspective was well done. I would recommend this movie.

Misleading but less so than most coverup productions. Assumes lone-Oswald theory. In commentary, director ridicules conspiracy "nonsense" and "mythology".

Gives Oswald appearance of Arab terrorist. Shows public assumption of his guilt per pre-arranged announcement and media deluge. Omits footage of real Oswald's convincing denial, which had to be stopped by Ruby.

Makes Zapruder a hero, but shows only a bit of his film -- too little for full effect of head slammed back by shot from front. (Zapruder film was suppressed for years. Apparently a better film, taken by woman from across street and including the fence, was confiscated and suppressed completely.)

Shows LBJ's demand for body, armed theft thereof before legitimate forensic autopsy could be performed, and farcical pretense that usurper LBJ was himself in danger.

Shows lawless FBI destruction of evidence. (Can anyone doubt other evidence was altered?) Deleted scenes show FBI agent squirming with Oswald, and SS detail chief wanting not to hear of FBI-Oswald tie.

Shows government effort to get a confession from the dying Oswald, but omits LBJ's phone call to one of the doctors demanding it.

The inclusion of these embarrassments gives the film an appearance of objectivity. But it omits the decisive facts: (1) Several witnesses saw shots being fired from fence on grassy knoll, and many more heard them or felt the bullets whiz over their heads. (2) Patrolman Baker's encounter with Oswald on second floor excluded him as shooter (see detailed critique of this point in my comment to book version of PARKLAND). (3) The seven treating surgeons thought throat had entrance wound, and back of head was blown out by bullet exiting.

Film shows Oswald's mother as flaky in claiming he secretly worked for the Government, implying only cranks could think that. But in fact there was a connection. The CIA ran many expendable stringers. In his last mission, Oswald was used as a scapegoat.

In any case, PARKLAND is a dismal film, almost unwatchably tedious, with unconvincing acting and lethargic direction and editing. It maintains a mushy, soap opera atmosphere of false emotion, as heartstricken mourners smother their grief in cigarette smoke.

Tonight, there will be few Americans
who will go to bed
without carrying with them the sense that somehow
they have failed If in the search
of our conscience we find a new dedication
to the American concept that brook no political, sectional,
religious or racial divisions. And it may yet be possible to
say that John Fitzgerald Kennedy did not die in vain That's the way it is,
Monday, November 25th, 1963 This is Walter Cronkite.
Good night

By the Washington clock, at a little
after 1 o'clock this afternoon,
President Kennedy was alive as any human
being ever gets, young, strong, vigorous
looking forward to, no doubt, 5 more
years, he hoped of leadership in this country
and of the western world.
There is no more news here tonight,
and really no more to say except that was has happened today has been
just too much, too ugly, and too fast.

Roy Kellerman: The president is coming with us. ---

Lem Johns: Where are we putting the coffin?

Col. James Swindal: I don't know. I never thought about it.

Lem Johns: We're not flying it below like a piece of luggage.

Abraham Zapruder (debating with the Life magazine rep on the ethics of publishing the kill shot frames of his film of President Kennedy's motorcade): "...It was a very undignified end for a *very* dignified man!"

JanPerrin thinks this title is suitable for 18 years and over

There are no summaries for this title yet.

There are no notices for this title yet.

Find it at BPL